You may have heard that breakfast is the most important meal. I mean, after all, breakfast does set up your day! As a plant-based registered dietitian who has been vegan for over 10 years, I know a thing or two about tasty and healthy vegan frozen breakfasts! When it comes to breakfast, regardless if you’re going the sweet or savory route, you want to make sure that there is enough protein and fiber in the meal to keep you full and satisfied. For example, if you’re used to eating only oatmeal and you’re getting hungry – you need some fat, and protein in there to help round it out! Same thing is true for these vegan breakfast foods – just because a vegan sausage has protein doesn’t mean it has fiber – so eating it with a whole grain waffle or piece of toast is more like a winning combination!

It can certainly get more complicated that looking at protein and fiber but if you only focus on two things, let it be those things. And thankfully, now there are oh so many vegan frozen breakfast products to help you meet your nutrition goals cruelty free. I am going to wrap up the ten best vegan frozen breakfasts – now these are products made and designed for life on the go. If you’re looking for vegan breakfast recipes, keep on moving because you won’t find that here. If you have any questions about a vegan breakfast or about any of the products listed below, be sure to comment!

What We Love: With 12 grams of plant-based protein (even the eggs aren’t really eggs!), this Gardein Mediterranean classic with a vegan twist will be one of your favorites when you want a midweek frozen meal pick-me-up. The non-GMO ingredients means that you’re putting quality foods into your body but with the convenience of a frozen food as it’s ready in just 6 minutes. Find Gardein Shakshuka HERE.

Considerations: Gardein Shakshuka bowl is a bit spicy and would not be suited for individuals with GERD or those that cannot handle a bit of spice or tomatoes.

Considerations: While these hash browns only have one gram of protein, they have a couple grams of fiber and can help round out a meal with a vegan sausage or plant-based egg patty for a savory start to the day. 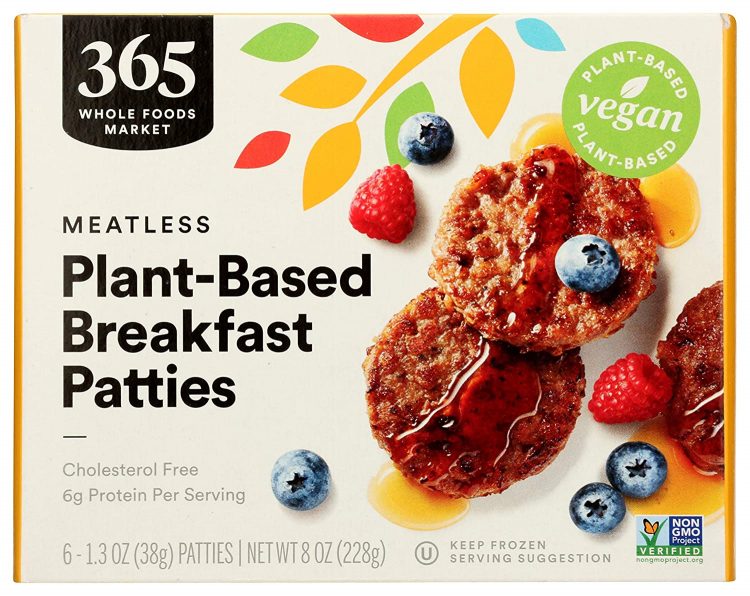 Considerations: They are a bit more crumbly than the traditional veggie patties that use egg as a binder but remember, these 365 breakfast patties are 100% cruelty free!

What We Love: If you’re in need of a sweet start to the day, look no further than Van’s Gluten-Free Blueberry Waffles that can be eaten like toast with peanut butter spread on top or serve up as hearty waffles with blueberries, walnuts, and syrup! They are naturally gluten-free and vegan but they have the same wonderful waffle texture – crispy on the outside and tender, soft on the inside! Sweeten your breakfast line-up with these ready in minutes gluten-free blueberry waffles.

Considerations: Because they are gluten free, the flour blend (brown rice, rice, and soy flour) is not a super high fiber blend like a whole wheat would be.

6. Beyond Breakfast Sausage from Beyond Meat, Plant-Based Patties, Frozen

What We Love: These vegan hearty breakfast sausages from Beyond Meat are similar in texture to breakfast sausage but made from plant-based wholesome ingredients. With 11 grams of plant-based protein per serving (2 patties), these vegan frozen breakfast patties are a great way to help jump start your day. They also have less sodium than many other meat-based and plant-based sausages. Make your breakfast go beyond the usual with Beyond Breakfast Patties.

Considerations: Beyond Meat Breakfast sausage patties are more expensive than many other frozen breakfast food but they are indeed very tasty.

What We Love: Made with organic whole wheat flour, these moderately high fiber and protein waffles are a comforting way to start your day. These vegan frozen waffles can be more satisfying with the addition of a nut butter slathered on top with walnuts and fruit on the side. Mmmm, I’m getting hungry just thinking about these fluffy but crunchy vegan frozen food item that is ready to eat in a matter of minutes. These make great snacks eaten like a piece of toast too! Check out 365 Homestyle Waffles HERE.

Considerations: They do have a couple more grams per serving of added sugar, but it’s not significant really – only if you are hard core limiting sugar intake. They are still a lower sugar item and certainly the 365 Homestyle Waffles have less sugar than cereal would.

Considerations: Kashi Frozen Waffles like many other frozen waffles are not as power packed as if you made waffles at home but then again…it’s likely you’re choosing a vegan frozen breakfast food because you need something that’s ready fast and making your own waffles is definitely not a fast process (especially with wholesome ingredients that take longer to cook).

What We Love: Another Gardein vegan breakfast bowl makes the list because they are savory, tasty, and it’s hard to pass up 13 grams of protein that’s ready to eat in only a matter of minutes. This Gardein vegan frozen breakfast bowl has more familiar flavors with potatoes, bell peppers, black beans, and vegan cheese and eggs! Your breakfast will not disappoint (nor will it keep you hungry) with Gardein Southwest Breakfast Bowl.

Considerations: Both of the Gardein frozen breakfast bowls are a bit higher in sodium than other vegan frozen breakfast options. This Southwest Bowl has 770mg of sodium per serving which is quite a bit, especially depending on what else you may be eating for the day.

What We Love: Just Egg products use mung bean protein isolate as a base to provide a good bit of protein (7 grams in these plant-based vegan egg patties), but Just Egg products taste the most like eggs! So if you are vegan and wanting an egg-like experience that will fool even the best omnivore, use Just Egg products. The egg patty is great for those quick weekday meals and can be cooked in a toaster, skillet, oven, or microwave for ease and versatility. Add some vegan cheese to the egg patty on a whole grain english muffin (Like Seeds of Life brand) and you’re cooking up a mean vegan frozen breakfast! Check out Just Plant-Based Vegan Egg Patties HERE.

Considerations: While these patties are versatile and fun for a vegan breakfast, the Just Egg Patties are missing out on fiber. That’s why I would be sure to eat it with some fruit or whole grain foods to maximize nutrition and satiety.

What We Love: Amy’s Tofu Scramble takes the cake in this vegan frozen breakfast list as it tastes absolutely amazing, it’s hearty and filling with 20 grams of protein and 5 grams of fiber, but it also is quick and easy! Whether you need breakfast on-the-go or you’re in the mood for a hot savory breakfast but you don’t have the time, Amy’s doesn’t disappoint with this readily available Tofu Scramble. Also, if you’re new to cooking with tofu, perhaps trying it in a meal like this vegan bowl would be a great way to try it out. And while tofu scramble is typically eaten for breakfast as an egg scramble substitute, this meal can really be eaten for breakfast, lunch, or dinner. Check out Amy’s Tofu Scramble HERE and satisfy your breakfast taste buds!

Considerations: As some of the Gardein meals, Amy’s Tofu Scramble has quite a bit of sodium with 790mg per serving. So if you’ve been told to watch your sodium, this would not be the best choice for you. However, if you are in good health and eat many potassium containing foods, it will help balance out the sodium intake.

There you have it folks…the ten best vegan frozen foods with everything from savory to sweet! Of course, there are other options like frozen steel cut oats from Simple Foods Made Good but there isn’t as much protein in there compared to the foods on this list. Remember, you want fiber and protein at every meal but especially at breakfast to help start the day off with a bang and to ward off any vegan hunger pangs!