Do you love those crispy on the outside, soft on the inside, warm grid pattern breakfast delights aka waffles as much as I do for breakfast?? Then if so, you may be wondering …are waffles vegan?? Perhaps you’re cooking brunch for a vegan, going out for breakfast, or just plain curious! Today, I’m going to dive into this deeper…

Yes…and no. Most commercially prepared frozen waffles (think Eggo, etc) are not vegan and contain milk or milk based ingredients and are not vegan. Also, waffles prepared in most restaurants (think Waffle House, IHOP, etc) use eggs and milk in the waffle batter and are not vegan.

Now…with that being said… you can make vegan waffles at home easily though! You may also find some granola type cafe restaurants that offer vegan waffles, but that’s less likely. What I’ve discovered in my home waffle making is that I love hearty, wholesome vegan waffles and they take a long time to cook – about 7-10 minutes for each one! And that’s not even in a Belgium Waffle maker! So, I also think that it’s faster and easier for restaurants to offer traditional waffles instead of vegan waffles. If you’re curious about making vegan waffles at home, here is my favorite recipe: 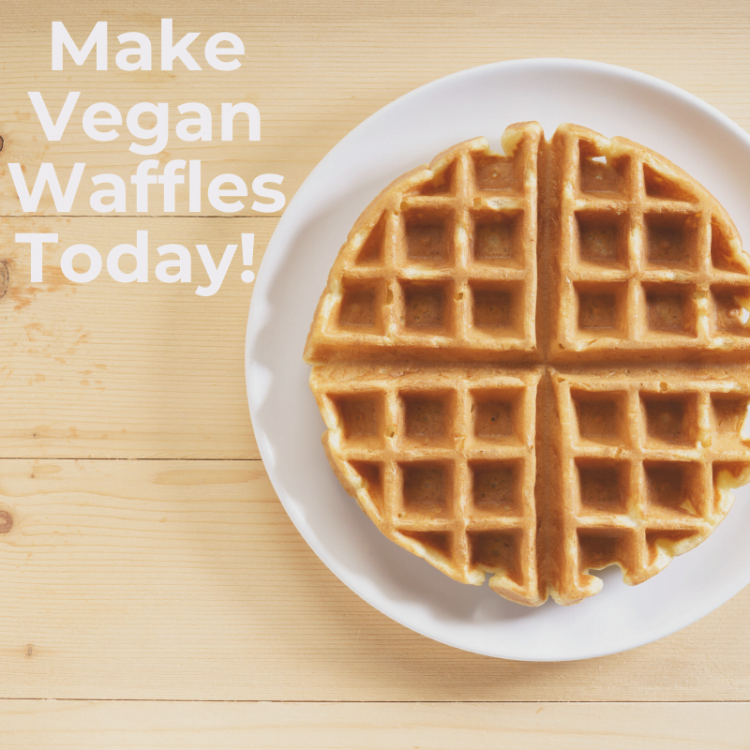 1. Preheat waffle iron according to manufacturer’s instructions.
2. Make the “eggs”: In a small bowl, combine the ground flax or chia seeds and water. Stir, and set aside to thicken.
3. Make the Vegan Buttermilk: In a large measuring cup or bowl, measure 3 1/2 cups of soy milk or milk of choice. Add the apple cider vinegar, stir a little with a spoon and set aside to curdle.
4. In a large bowl, whisk together the flours, baking powder, salt and sugar.
5. Add the flax eggs, vegan buttermilk, melted coconut oil and vanilla to the dry ingredients. Stir until just combined with a large wooden spoon, being careful not to over mix. The batter should be fairly thick, if it’s too runny add a few tablespoons more of flour. If it’s too thick, add a little more milk.
6. Spray waffle iron with oil (unless your waffle iron is non-stick). Pour the recommended amount of batter onto hot waffle iron, and cook until the waffle is golden brown on both sides.
7. Serve immediately, or keep in a warm oven (200 degrees F) until ready to serve or let cool and freeze! . Top with anything your vegan heart desires!
Are Waffles Vegan?