If there is only one thing that people want from their vegan cheeses, it’s that they want them to melt! As a vegan dietitian, I understand this is what people want because I want it too. I also have a unique perspective when looking at cheeses to review the quality of their nutrition. I will say, these are the best vegan cheeses at the time of posting and in a few months, there could very easily be other additions as plant-based cheese are entering the market all the time.

Daiya Vegan Cheese – The shreds melt better than the slices for the most part.

So…What’s the best vegan cheese? It truly does depend on what you’re looking for – just like you might use American Cheese on a burger but Feta Cheese on a salad, you likely will want multiple vegan cheeses in your fridge at any given time but these will definitely give you enough options!

What We Love: Chao Vegan Cheese is fantastic when it comes to making ooey gooey grilled cheese. It melts perfectly in between two hearty pieces of bread and isn’t sticky or spongy like some vegan cheeses. It has a great mild flavor, similar to the American cheese world and works best on a sandwich otherwise the flavor will get lost in something more flavorful. Find Chao Vegan Cheese HERE.

Considerations: This is not the type of vegan cheese you’d want to throw on your salad or put in a mixed box lunch as it doesn’t taste as good cold as it does when it’s all warmed up and gooey. Chao vegan cheese is made to melt in our opinion! 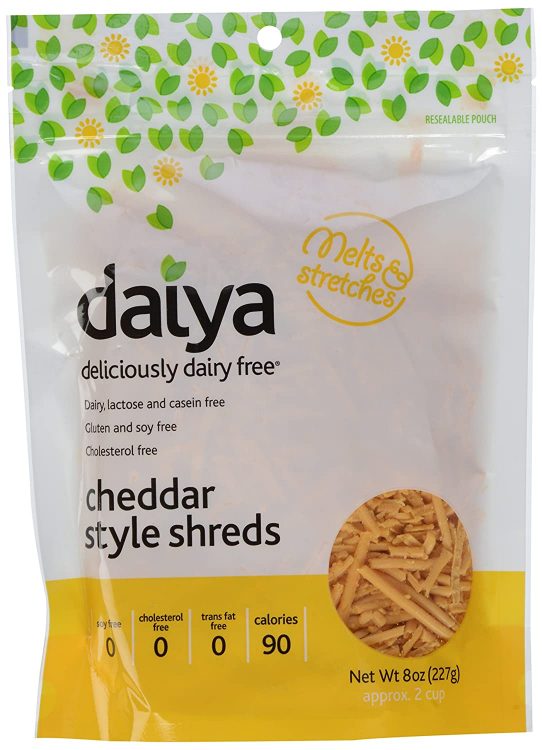 What We Love: Daiya was one of the first vegan cheeses and it’s easy to find. Daiya vegan cheese is also super versatile and these shreds can be used for everything from tacos, enchiladas, mac and cheese, salads, and soups! It melts well and tastes great on it’s own without being melted. Although the cheese can have a powdery taste to some people, we love that it doesn’t cake. Check out Daiya Vegan Cheese Shreds HERE.

Considerations: If you top your pizza, tacos, or other cheese favorite with too many shreds, the cheese can taste a bit spongy in our opinion. This can easily be solved by using just a bit smaller amount – and that way it will last even longer too!

What We Love: Violife cheeses taste the best without being melted! These cheeses don’t have quite as much flavor when they are melted compared to when they are eated straight from the bag but this vegan cheese also melts great and adds that creamy mouthfeel you’re looking for when thinking about vegan cheeses. Find Violife Vegan Cheese Shreds HERE.

Considerations: The Violife Vegan Cheese is a bit on the pricier end compared to Daiya or Chao cheeses but it is also made with high quality ingredients.

What We Love: Also from Violife are the Mature Cheddar Vegan Sliced Cheeses which have a bit more tang to them than Chao or some of the other more mild vegan cheese. So we love that this one is packed with flavor, melt-ability (is that even a word?!), and with great texture. Check out Violife Vegan Shreds HERE.

Considerations: In out opinion, these Violife slices didn’t melt as well as the other slices on the list for a burger – so if you’re choosing a burger, the cheese may just stick to your bun a bit!

What We Love: The price point on 365 Everyday Value Vegan Smoked Gouda slices can’t be beat. This vegan cheese is economical, made without genetically modified ingredients, and melts and stretches just the way you would like. Find 365 vegan cheese HERE.

Considerations: While it doesn’t taste *quite* like the dairy kind of Gouda, this vegan cheese is still super tasty and a great addition to your fridge.

What is your favorite vegan cheese? Did it make the list? Comment below and let us know and we’d love to try it and update the list as needed along the way!